Sorry for the abrupt nature of this post, but the thing is... I'm writing for a monthly publication now.  As  I wish to remain anonymous, I will refrain from telling you which, but it's local, not some fancy Otaku USA or ANN gig. However, I would like to thank my reader(s) and blogger for providing me an opportunity to improve my craft. While the blog may be going down, don't give up hope, Cat Demon Spirits fan(s)! In a year or two, you may see something new on this site. Now, to conclude...
http://www.youtube.com/watch?annotation_id=annotation_238448&src_vid=HZZyYDMu698&feature=iv&v=PUxvSEzIOWU
Thank you.
Posted by N at 4:11 PM No comments:

Review: The Quest for the Missing Girl

One of the greatest problems with Japanese comics today is the  lack of graphic novels. I don’t mean the phrase in a pretentious, “everything-should-be-serious” sort of way, but I’ve found that many recent manga appear almost reluctant to tell a story. Characters have been reduced to types and plot has been marginalized, turning the medium into what can at best be called TV on paper. It’s not that these TV-books are bad, mind you, it’s just that I don’t always want that. Sometimes I want to read a comic with a plot that begins and ends, relatable characters with complex motivations, and maybe even some meaning beneath the surface. A novel told in graphics, if you will. As uncommon as they are, the Japanese graphic novel is not impossible to find. There are many dependable and unique artists with plenty of work in translation who tell stories worth immersing oneself in. One of these artists is Jiro Taniguchi. Best known on these shores for quiet, restrained comics such as A Distant Neighborhood and The Walking Man, both of which are excellent and worth reading, Taniguchi has also done a number of genre stories with an emphasis on action and conflict. The Quest for the Missing Girl is one of these stories.
Twelve years ago, a mountaineer named Shiga declined an offer from his best friend, Sakamoto, to join an expedition to climb a mountain in the Himalayas. Sakamoto died on that expedition, and Shiga, feeling guilt over his friend’s death, has rarely left the mountains since, but vowed that if Sakamoto’s wife and daughter were ever in danger, he would return to the city and protect them. When Sakamoto’s teenage daughter, Megumi, goes missing, Shiga leaves the mountains for Tokyo to find for her. However, Shiga soon discovers that life in the city is more complex than it once was, and the teenage Megumi may not be as innocent as the young girl Shiga knew. 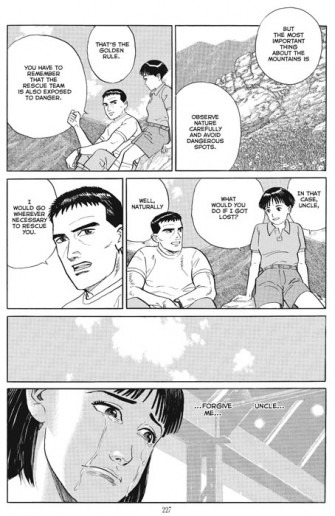 Despite being very different from many of Taniguchi’s other translated work, Quest was actually originally serialized around the same time as titles such as A Distant Neighborhood, and features many familiar themes. In fact, like in A Distant Neighborhood, a central theme of the story is of youth viewed through adult eyes. This theme was presented quite literally in Neighborhood, with the middle-aged protagonist time-traveling back to high school, experiencing his past with new insight. In Quest, the theme is more metaphorical, shown through Shiga’s investigation in Shibuya, the biggest shopping district in Tokyo. The area is crawling with teens, mostly delinquents, going to nightclubs, shopping with “borrowed” money, being “bad”. On the surface, these teenagers are liberated and completely independent of adult authority, perhaps even to a worrisome extent, but in reality these people are confused, lonely, and afraid to look for help. That’s how life is for a teen, and for better or worse, that will never change. This message is conveyed through a number of interesting characters, such as Yoshio, a man whose observations on youth culture inform much of the story, and Maki, a Shibuya frequenter who was Megumi’s best friend and may have unintentionally caused her disappearance. However, one of the most important characters in this story is the missing girl herself. While Megumi makes few actual appearances, her presence is felt throughout the entire narrative. Her personality, the choices she made, and her connections to the other characters are central to the unfolding events. Without the missing girl, there would be no quest.
As much as these reflections on adolescence are intriguing, the most memorable element of the story is its protagonist. While Shiga’s search for Megumi may be the stuff of pulp, his single-minded determination to atone for his guilt over his friends death is genuinely moving, real stuff. As the story progresses, we’re really given a sense of why Sakamoto was such an important person to Shiga, and why Shiga wants to help the people around him. Shiga isn’t superhuman, but a man deticated to being part of something larger than himself. Taniguchi does a fantastic job examining his character over the course of the story, particularly in the gripping final chapter. Many thrillers, both good and bad, build to a climactic metting between the hero and villain, either a conversation, a fight, or both. The important thing is that the two meet, and only one walks away. And while there is a hero and a villain, rather than have them confront each other, Taniguchi crafts a tale of Man Vs. Himself, a tense spectacle of pure motivation. We see Shiga for who he truly is, his hopes, his regrets, his desperation, made physical in beautifully drawn and downright architecturally designed pages as thrilling as the fiercest of battles. Unfortunately, this leaves little room to truly develop the villain as more than a cardboard cutout, but that hardly matters, as the comic already features some extremely powerful graphic storytelling.
Of course, Quest could have easily been a straight-forward exercise in genre, which, in a way, it is. However, Jiro Taniguchi is above that sort of thing. Taniguchi has been a working cartoonist for a good 30 years now, and over those years has refined his style, becoming a genuine auteur of the medium. Taniguchi’s style is very dynamic and realistic, dating him as a member of the Gekiga movement (Gekiga= Dramatic Pictures; a bit like the term “graphic novel”), but at the same time the art has a certain warmth, a “cartoonish” quality, reminiscent of early Osamu Tezuka. These different styles become one under Taniguchi’s penmanship, creating a mood of somber nostalgia. At the same time, the work is never boring; Taniguchi can really draw a fight scene. Often, a scene with two characters sitting and talking in a café will be a tense and exciting read, and action sequences have a hint of brooding and restraint. The world presented in Taniguchi’s work is both consistent and unexpected, and always worth reading.
In conclusion, The Quest for the Missing Girl is an excellent addition to the Taniguchi canon. The comic features many of Taniguchi’s trademark nostalgic themes and styles, but is unique for its portrayal of modern-day urban life. As I alluded to earlier, a handful of characters are poorly fleshed out, but most of the central characters are extremely well-written. The final chapter is especially well-executed, and is easily one of Taniguchi’s finest sequences. For those who found A Distant Neighborhood too culturally specific, The Quest for the Missing Girl is a great introduction to this extremely productive artist’s works.
Posted by N at 7:00 AM No comments: