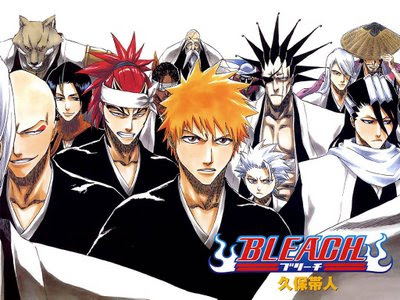 Okay, to be honest, I don't hate what I am about to talk about with a fierce passion, which will be mostly what I will talk about in this column. But it's Christmastime, and Christmastime is not a time for rage, just mild displeasure. Anyway, it is something I wish did not exist, and that is what this column is about.
Bleach requires no introduction. Alongside Naruto and One Piece, it represents the third half of the modern Shonen Jump's holy trinity of gargantuan manga properties. Naruto is overlong, but the author clearly loves writing it. One Piece is genuinely amazing, as I have detailed previously. However, Bleach is just sad.
It began sublimely, with a small cast and a fun premise, with stylish art to boot. Written by Tite Kubo, the story followed the adventures of Ichigo "Strawberry" Kurosaki, and orange-haired tough guy who can see ghosts, Rukia Kuchiki, a soul reaper (shinigami in original japanese) who, after accidentally giving Ichigo all her powers, acts as his mentor, his friends Orihime and Chad, Kon, a talking stuffed animal (long story), and their adventures fighting "Hollows", incomplete and therefore evil spirits. With that begins a fun, stylish romp though otherworldly spooks. It was even better than One Piece. Until...volume four.
It's no secret that the Shonen Jump editors secretly control all the manga. Dragon Ball Z is probably the most famous examples of an editor forcing an author to change their plans for, well, monetary reasons. However, none have been ever so shocking as what happened to Bleach. In volume 4, Rukia is kidnapped by her evil brother, and with the help of some side characters who will never appear again, Ichigo and team go to the Soul Society to save her. I must admit, at first this idea left me a little giddy with fanboy excitement. If Bleach was neat and off the wall, who knows what will happen when the rules of the normal world are completely scrapped. It was going to be like One Piece's Grand Line. Boy, was I in for a shock. Lame, repetitive plotline of fight-lose-train-win-train. Stock, cliche characters. Hard-to-follow script. Random use of Ki. No character development for anyone but Ichigo, if you call power ups development anyway. Lack of trademark wit and spunk. And, of course, financial success. I hate to say this, since I have many friends who happen to be die hard fans of Bleach, but this series is ruined for me now. Bleach is dead. A different, lower quality series that happens to be called Bleach has taken its place. I really wish this new series didn't exist.

Email ThisBlogThis!Share to TwitterShare to FacebookShare to Pinterest
Labels: 2, bleach, disappointment, shonen jump, why god why, zyword of the week