Debatable: Have we gone too hard on moe?


I think I first heard about moe (the genre, to be specific), it was in an article in Jason Thompson's Manga the Complete Guide (which, by the way, is a great read that I would readily suggest to anyone new to the obsession). Anyway, if I remember correctly, the article was on the so-called "lolicon" (self explanitory, I think) boom of the '90s and the Myazaki serial murders that brought the trend to an end. Moe (pronounced like Mo-AY) was noted as a minor side trend that involved the same style of the Loli trend, but in much more innocent situations meant to give the (generally male) reader "protective" feelings. Lately, it has exploded from a side note into a fandom of it's own, and became so huge and dangerous to the world (isn't that ironic?) that legal action had to be taken (this is kind of sad, as everyone, even the moe-makers, should have freedom of speech, but it was also inevitable). However, have we been right to bully this once-innocent genre, or should we have been focusing our attention on the cruel businessmen who took advantage of a passing interest to sell out and strip bare our precious innocence?

But wait, hadn't we all agreed that all moe was gross exploitation of young girls. First, the girls in moe are not necessarily young. The moe "look" is a stylized look, like that "manga style" they used to always market, with some popular tropes. Calling moe "little" would be the same as calling any other artstyle "little".  I hate to bring up Oreimo here (which, btw, I hated for its siscon undertones and half-formed characters, nothing else), but in that show, Kirino is shown enjoying video games obviously created for male otaku. Now, let's imagine if this happened in reality. Unlikely yes, but not as illogical as one would have thought. The reason for this is, moe (and j-cool artwork in general) is not designed to look like any real person in existence, let alone little girls. Remember, Kirino may have been 14 (?), but she could have easily been 40, or 4, or 18, or 80, or 8. Also (gasp!) she is not American. She just looks like it to us silly foreigners.


Our problem with moe is actually rather silly. First of all, the previous appearance of the style before moe was a thing was in children's shows. This put off many people before they even took a look at the stuff. Also, that horrid incedent in the '90s only skewered people's perception even worse. The thing is, it wasn't only the non-consumers who were confused this time. Dumb otaku and dumber production studios decided as always that what the people want is harem, so we get a ton of stuff like this year's Dragon Crisis! and the form gets perverted However, it is not all perversion. There is one shining example, a popular one at that, which shows to me that moe does not have to be what it is today:

You knew this was coming, didn't you.


Yotsuba&! is an impressive comedy manga about a adopted little girl with a positive outlook on life exploring her new neighborhood. It has not one ounce of perversion, yet does everything a moe is supposed to do in the first place- give the reader protective, or more accurately parental, feelings about a totally awesome little girl. A while ago I was talking to a (female) non-manga fan friend of mine on Facebook. I asked her if she was reading anything, and then suddenly, she broke into a rave about Yotsuba, demanding to know if I had read it. Look at that. Well written, popular on a mainstream level (rare for any manga), and... moe. I rest my case. 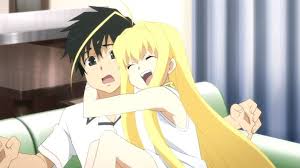 
What have we learned today? We have learned that moe does not need our scorn or our pity, but rather our help. We the fans NEED to tell production companies what we want, and in the end, what we want is not one or two styles to exist or not, but high quality product that we can embrace, no matter what it is. In short, we need both more and less moe, we need productions with heart, and those could be anything. In the words of Haruhi, "I'm not intrested in normal humans.If any of you are aliens, future men, otherworlders, or espers, please come see me."
Posted by N at 6:17 AM