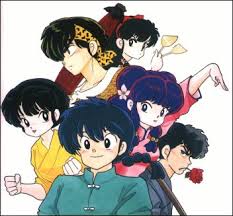 Ranma 1/2 By Rumiko Takehashi. Originally published as らんま½ (Ranma Nibun-no-Ichi). 36 volumes.
Now here is a series designed designed for mass appeal. Akane Tendo, a tomboyish high-schooler, is one day told by her father, the obsessive martial artist Soun Tendo, that she is to be engaged to Ranma Saotome, who will be the heir to the Tendo "Anything-Goes" School of Martial Arts. However! After a poorly thought-out training mission with his idiot father in China, Ranma has been cursed to turn into a woman when splashed by cold water, of all things.

Despite the what sounds at first like a wet dream (no pun intended) of a plot, the series has a great appeal for  a more general audience- in Japan, the series is more popular among young girls than any other demographic. This is because unlike some series that would focus on boobies and fanservice, Ranma 1/2 focuses on bakas and sillyness (actually, there is a constant stream of bare breasts shown in the series, but they are shown in a very un-sexualized manner-- all part of the joke). Takahashi's sense of humor comes from mining the negative aspects of people, so every character gets a chance to be a complete moron, have horrible luck, or most often, both. The series also possesses the amazing range of being silly, really silly, and silly but epic (such as the "Pantyhose Taro" storyline, easily the highlight of the entire series).
The stories don't have that much variation; in his Manga: The Complete Guide, Jason Thompson compares Ranma 1/2 to a long-running sitcom. Towards the end of the series, the artwork attains the glossy, screentoned appearance that is seen in InuYasha and Rin-Ne. I do not particularly like this style as it lacks a certain "homemade" quality that I used to enjoy. However, watching the artwork evolve into the slick modern appearance is actually kinda fun. It should also be added that Takahashi draws a rad Henohenomoheji, and even with flipped artwork it really shines though.
Posted by N at 1:56 PM