Recently, I posted an article on this blog defending moe. Allow me to explain my position better. I do not defend series like Dragon Crisis. I do not defend pictures of pint-sized cat girls lifting their skirts. I defend stuff like this.

Shoulder-a-Coffin Kuro tells the surprisingly bittersweet story of Kuro, a somewhat tomboyish traveller under some kind of a curse carrying a coffin though storybook countries and villages toward an unknown destination. She is accompanied by Sen, a talking bat who may also be a victim of the curse, and Nijuku (29) and Sanju (30), two innocent young girls with odd abilities invented (they are apparently genetic mutations) by a professor who was brutally killed. Many stories center around Kuro and friends going to a village and maybe helping someone out, but many stories are just... traveling.

First of all, this is probably one of the best, most unique 4-koma (4-panel comics) that I've encountered in a long time. Most mangaka use the 4-koma system for gag manga with a punch line every fourth panel, not to mention the fact that these days, nearly every 4-koma involves the life of charming high school girls in a school club, a la Azumanga Daioh. Not Kiyuduki, however, who uses the format to create an ongoing story that reveals its fairy-tale plotline at a refreshingly patient pace. And it's not as if the format is superfluous- the 4-koma strips give the comic a rhythm like a renaissance folk song. Also, the kinetic artwork manages to look fantastic even when crammed into those tiny boxes that are 4-koma panels.

Now let's look at Nijuku and Sanju. At first glance they appear to be a somewhat disturbing example of moe perversion (Those cat ears! The tails!), the type of thing that DOES count as child pornography and should be eliminated. And yet, this is not the case. While Nikuju and Sanju start as fairly blank-slate characters, they grow to have, yes, ACTUAL personalities! The protective feelings they are intended to create is of the parental sort, if that makes any sense, a type of desire I believe to be perfectly fine and, most importantly, platonic. And they fit into the story just fine, which may have been my largest concern. 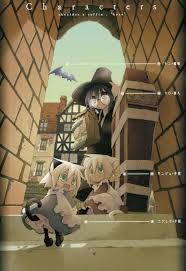 Sadly, like so many good titles written for a specific demographic, Shoulder-a-Coffin Kuro does not sell very well, and has been put on hiatus by Yen Press. I'm not sure weather or not this means it is actually cancelled (american manga publishers have been known to be fairly dubious on this topic), but since they probably still have the license, I urge every reader to go seek out this title, because, as it says in this recent article by retailer and blogger Christopher Butcher, the only way we can logically expect any publisher to publish any manga title is if people buy it. Anyway, even if publication never resumes for Kuro, it's a worthwhile look for anyone who enjoys good stories and good storytellers.